Europe is the focus of this week’s Read the World Summer Book Club, hosted by Jamie C. Martin from Simple Homeschool, which we’re thoroughly enjoying. Rather fortuitously we’d planned to be in Spain for the first half of the week, practising the children’s developing language skills, so we decided to keep it simple and focus nearly entirely on Spain and our home base, the UK.

If you’ve not signed up yet, but are planning on doing some form of continent or country study in the next year, I’d seriously recommend signing up on Simple Homeschool and joining the Read the World Summer Book Club facebook group. This group provides so much excellent advice on book recommendations; suggestions for accompanying recipes; games; relevant craft, music, sport and dance activities and fantastic You Tube links, all put forward by some seriously creative parents!

So here’s what we got up to this week on our adventures around the globe:

As we’re UK based and all bibliophiles, we’ve read many European-based books either together or individually before. Here are some of our most loved:

We read three new superb books from Jamie’s Give Your Child the World recommendations this week.  Good Masters! Sweet Ladies! Voices from a Medieval Village was our read aloud of choice, a fascinating collection of stories from individuals in a 1255 village, ranging from the lord’s daughter to the plowboy to the miller’s son.

Bean7 read War Horse by Michael Morpurgo, a beautiful story written from the perspective of Joey, the horse, and his experiences in World War I. Bean8 read The Star of Kazan by Eva Ibbotson and was hooked immediately. It’s about Annika, a servant in a grand house in Vienna, desperate to find her mother who abandoned her at birth. However, when one day her mother, a wealthy aristocrat, arrives to finally claim her and take her off to a lonely castle, Annika soon discovers not all is what it seems. Secrets and lies are untangled and she finds herself in great danger, needing to take flight before it’s too late.

I’ve also chosen these titles from her list of recommendations, ready for some relaxed reading later on in the summer:

When in Andalucia in the first part of the week, we couldn’t not experience the passion and spirit of a Flamenco performance: the popular traditional dance that’s been practised in this region for nearly five hundred years. This exotic dance with its unique accompanying music is completely captivating and a must see if you’re travelling to this area. We had a recommendation from the lovely Worldschooling Andalucia facebook group about an excellent one in a restaurant in La Herradurra, providing an intimate and authentic setting. Bean8 in particular was transfixed by the performance.

Our trip to Andalucia was planned primarily for the kids and me to practise our Spanish language skills. Bean8 asked to learn Spanish over two years ago and so we’ve all been trying our best to master the language as best we can since then. Progress is slow and steady, but always enjoyable. I love that we have the flexibility as home educators to select which language we learn, when and to what degree. If the children were in a UK primary school, they’d most likely be offered French, which, whilst a fantastic language to learn, would not be as useful to us personally as a family. In addition, the language taught in primary schools is fairly minimal, despite the fact that children absorb and pick up languages much faster at a younger age. That being said, if they weren’t as keen as they are to pick up Spanish I wouldn’t push it to the extent we are, but as it’s something we all enjoy, I’ve found various ways to help us learn together.

As I mentioned in this post, Rosetta Stone and the Michel Thomas CDs form the major part of our Spanish acquisition. I’d recommend them both; the former helps perfect their spelling, reading, listening and particularly their speaking skills, as they have to pronounce the words sufficiently accurately into their headsets for them to progress to the next lesson. The latter is a method of teaching Spanish which uses tips and tricks to get you speaking useful Spanish quickly. From fairly early on in the program, the children start to compose quite long sentences. I would say this approach has definitely improved their confidence in constructing Spanish sentences and just having a go. It’s also introduced some key verbs, which proved to be very useful on our trip to Spain. We do one track of the CD together each Morning Basket. Here’s an example of a snippet of the lesson:

Last year when we visited Seville with the children, we opted for an intensive Spanish course at the CLIC International House (see this post), but this year, we settled on a more relaxed approach. This saw the children practising their Spanish at every opportunity, from asking for tables and ordering food in restaurants; to playing football with Spanish children on the beach; to searching for the specific foods in the supermarket, asking for bags and translating the total cost of the shopping; to buying tickets and ordering audioguides at the Mezquita in Cordoba; to reading signs in the airport and towns.

The Spanish people are so very welcoming to children and without exception were extremely supportive of them practising their Spanish, suggesting and helping with alternative phrases where necessary. Here’s an example of Bean8 ordering some food:

Even though we were only in Spain for a week, I noticed a marked improvement in their language skills by the end of our holiday; they were both much more confident speaking in Spanish and seemed to get their ear in, understanding more of what was being said to them. On returning to the UK they tackled the Rosetta Stone & Michel Thomas work with a renewed vigour!

In addition to the two main programmes I mentioned above, there are lots of other fun ways to practise your Spanish skills. The kids love playing KLOO, a game in which they have to put Spanish verbs, adverbs, nouns and adjectives together to make sentences and translate them accurately to gain extra points. My two are incredibly competitive and love trying to see who can get the longest or most silly sentence! (NB: KLOO is also available in different languages, such as French and Italian).

We also had fun this week with some Spanish shopping in the UK! The children translated our grocery list into Spanish and then wrote it up for me. Once in the supermarket, we tried only to speak Spanish (or thereabouts!), helping them learn phrases like, “Donde esta/estan…” (where is/are…) or “Puedes encontrarme el azucar” (can you find me, the sugar, in this case). We did attract a few funny stares and smiles from our fellow shoppers, but it was a great way to learn and something we’ll be repeating to reinforce the new vocabulary.

I also set them a treasure hunt in Spanish, thereby practising their locational vocabulary in an interesting way (particularly as the treasure was chocolate!). They LOVED this and asked to me to set them another one, even if there was no more chocolate involved!

And finally, they’ve enjoyed coming up with phrases they’d like to know how to say in Spanish and using Google translate on my phone or the computer. In this way, they’ve learned some incredibly useful phrases, like “I am having a poo now!” (just in case you ever need the translation, it’s “Estoy teniendo una caca ahora!”).

In the second half of the week, we focussed on playing some of our favourite UK & Europe based games, including:

1. Top Trumps London & Shakespeare – we’re big Top Trumps fans in this household and have all sorts of different versions from the Elements to Deadly 60. The Shakespeare set is a particular favourite and the children love learning the quotes from each of the plays off by heart. 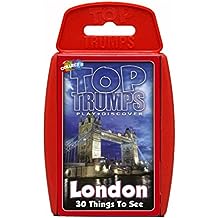 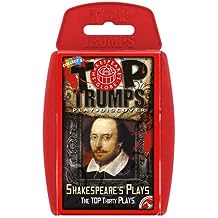 2. Mapominoes – based on the concept of dominoes but with maps, you slowly build a map of Europe by connecting countries that share a border. It’s one of Bean7’s favourites and has really helped their European geographical knowledge. They have to carefully study the map of Europe to establish which countries border the ones on the cards in their hands, and so figure out where best to lay their cards.

3. Scotland Yard – the kids love this game, in which one person pretends to be a criminal mastermind who has escaped the clutches of London’s Scotland Yard. It’s up to the rest of the players, acting as Scotland Yard’s famed detectives, to track him or her down, by working as a team and travelling across the city by taxi, bus and underground.

This is hands down my favourite game and has been played many times in our house. In this game, you have to build railway networks across Europe between specified cities to claim these routes as your own, with additional points going to the player who makes the longest continous railway. Lots of fun for adults and children alike, whilst the younger members also familiarise themselves with key cities across the continent.

To further aid their European and UK based locational skills, they had a go at these two jigsaws. Bean7 made up his own game of guessing the country/countries from the back using their shape as a guide!

We’re actually in the middle of studying the Tudor period at the moment, which fitted in nicely with Europe week! We use the Story of the World curriculum as the basis of our history work and supplement it with high quality books, documentaries and field trips. This week’s focus was more about Shakespeare, which went down very well as they’re both a little bit obsessed with him! Apart from listening to the excerpts from the Story of the World, answering questions on the passage, and summarising, we also read the relevant section of Tudors & Stuarts and the excellent Tudor Theatre book together:

We were fortunate to be able to visit the reconstructed Globe earlier in the year and watch Twelfth Night as groundlings in the yard (see Cathy’s post here), for the amazing price of only £5/person. This allowed us to imagine what it would have been like for these 16th century theatre-goers, as they were summoned to the theatre by the sight of a flag being raised and the sound of a trumpeter playing from the tiring-house hut, to watch these exciting and raucous plays.

We’ve been a little bit decadent this week, eating out at restaurants in Spain and the UK. Many tasty Spanish dishes have been sampled, including the delicious paella.

And for UK based food, we opted for traditional fish & chips on the beach:

And an afternoon tea at a castle:

Next week, I’ve vowed to be more healthy!

On the map front, they used another of the fantastic Kristin J. Draeger series, Draw Europe, to help them construct a illustration of this diverse continent.

Bean7’s maths lesson this week was on Roman numerals, so a little bit of anicent European influence to end this interesting week:

We’re looking forward to seeing what Asia holds for us next week!