Children love to help, and our Beans are no exception, some times this can be beneficial and on other occasions it can make even the most straightforward tasks doubly difficult. In fact, it can be tempting to reject offers of assistance, especially if you know that alone you will be quicker and more efficient. However, that would be to miss a whole raft of learning opportunities and bonding experiences.

This weekend I was preparing my brewing equipment, with some Beans’ assistance, ahead of a brewing session with some friends, when they became interested in finding out what all the vessels, pipework and cabling did. It was reasonably easy to explain the purpose of a majority of the equipment but the wort chiller (which is in effect a heat exchanger) was difficult to describe, given that the actual workings are all hidden from view. So, I decided that we should build a model together that would allow them to see how the science physically worked.

We found some old hosepipe and plastic tubing, and with the help of some string, a funnel, and gravity we produced a rudimentary heat exchanger – that actually worked! To prove this, the children were able to measure the decrease in the temperature of boiling water flowing through our model. (If you would like to make you own I have included some instructions at the end of the post.) 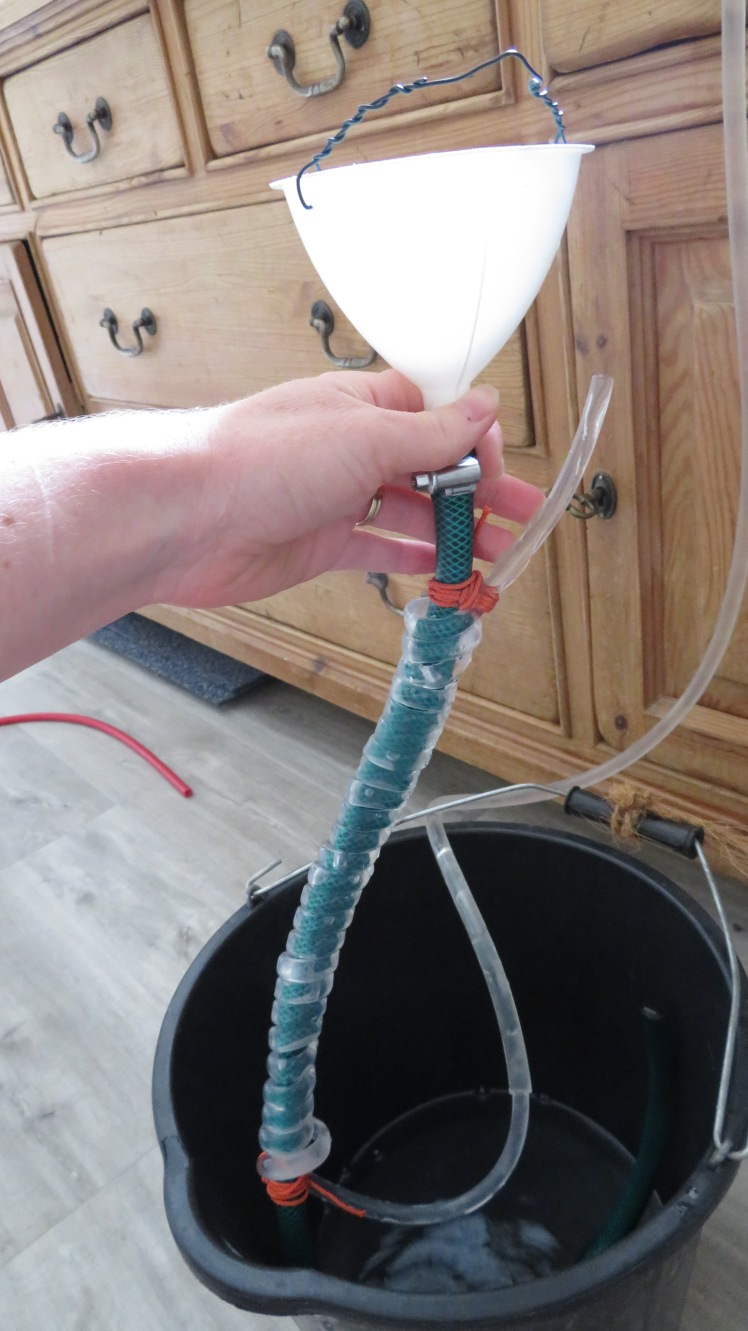 Here’s Bean9 to explain how it works:

Bean7 measuring the increase in temperature of the cooling water:

Bean9 measuring the decrease in temperature of the boiling water as a result of the cooling water flowing around it:

If I had not allowed the Beans to help me set up my brewing kit we would never have had a discussion about how it works, and we probably would not have had the enjoyable experience of building our own version of the equipment together.

Later that day, during the brew, when the wort chiller was in use, the Beans were able to see how it performed in practice. They were able to explain to my brewing colleagues how it worked and also how the heat exchanger on our boiler worked too!

To make the heat exchanger, you will need two separate pieces of tubing, at least one of which is flexible enough to be coiled around the other. Tie the more flexible piece of tubing to the other and then tightly coil it along its length, remembering to leave sufficient tubing at either end so that you can connect it to your cooling water supply and have a way of efficiently collecting the water once it has flowed through the system.  We used a funnel to ensure that our hot water was directed safely through our section of hosepipe. Ideally you would get your cooling water directly from a tap, but as our tubing didn’t fit around the tap, we used a gravity feed instead. In this case, an urn precariously balanced on a stool on top of a sideboard (!), but you could just hold the tubing up high and use another funnel to direct the cold water into the tubing.